How mindful & intuitive eating can impact our wellbeing and reduce stress

How Mindful & Intuitive Eating Can Impact our Wellbeing and Reduce Stress

It’s Mental Health Awareness Week and this year’s focus is all about body image – how we think and feel about our bodies and how that impacts our mental wellbeing.

Last year the Mental Health Foundation found that 30% of all adults have felt so stressed by body image and appearance that they felt overwhelmed or unable to cope. That’s almost 1 in every 3 people!

Today’s blog comes from Lisa Beasley who helps us to take a look at how Mindful and intuitive eating can impact our wellbeing and reduce stress. 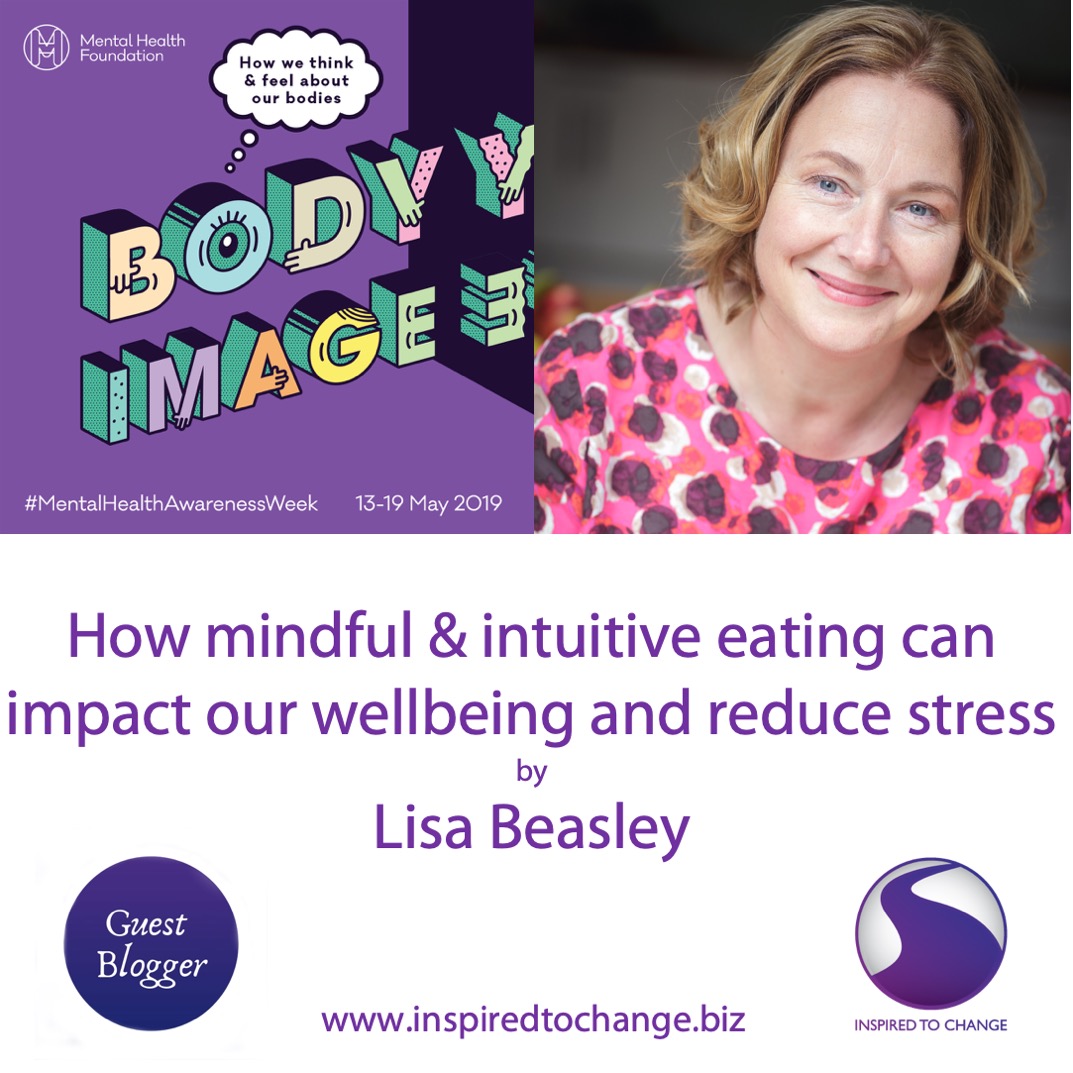 If I think back to my relationship with food before I learned about mindful and intuitive eating, it was stressful. A lot of my thinking patterns were about food, specifically what I could and couldn’t eat and also, feeling bad about myself when I inevitably ate things I thought I shouldn’t. You could say I had a head full of food because food was always in my thoughts. It was the first thing I thought of in the morning and pretty much the last thing I thought of at night.

The relationship between mental wellbeing our eating and our body image intersects, in that one influences the other.

I know people who when unhappy or stressed, lose all interest in food, whereas many others, turn to food in times of stress and use it as a way to numb emotional discomfort and to cope with certain situations. And if you’ve unconsciously accepted our cultural bias towards the ‘thin ideal’ like I had, weight gain comes with a side order of body dissatisfaction.

I was one of those people who would turn to food and I would eat way more than I needed a lot of the time, without understanding why. I kept wondering what was wrong with me because thought that no one else did this. Turns out they do. A LOT of people do and they feel really bad about themselves because of it. I had low self-esteem, I was anxious a lot of the time and I felt out of control around food, all of which led to me to an unhappy place.

I distinctly remember feeling trapped in a cycle of overeating, and didn’t know how to break free of it other than try and find some elusive ‘self-control’. But it wasn’t that I needed-it was a change in mindset and in my neural pathways.

Learning about mindful and intuitive eating literally changed my life.

When I started to explore what was underneath my eating patterns, I began to appreciate that my relationship with food wasn’t about the food. It was due to how I was thinking about food.

This started a process where I was able to break free from the unwanted patterns I had established and develop an easier, more relaxed relationship with food and ultimately, myself.

Many of us feel powerless to change. We think because we have a way of doing things, this is all we can do, but this is not the case.

Consider my previously well-worn habit of eating chocolate every night. I would sit down to watch television after the children were in bad and would routinely eat a large packet of chocolate (and the big packets contained more chocolate then!) The behaviour was ingrained in my brain. It was something I did on autopilot, without thinking, or tasting.

I worked on understanding WHY I wanted to eat by starting to build my awareness.  Next, I worked on slowing down my decision making around food. What feelings were coming up that were underneath my desire to eat more than I needed, had something happened at work, was I stressed out by getting the children to bed, or simply tired? The more I could slow things down, by remembering to ‘pause’ and reflect, the more I could make other choices and sometimes, not eat the chocolate. By repeating the new behaviour, I was developing new neural pathways, so over time it became easier to make the alternate choice.

I was driving to work the other day across an area in Bristol called the Downs. It’s a flat area of open parkland, about 400 acres in total and I often go running on it. I always do the same 5 Km route- it takes me about 35 minutes. I’m not particularly fast!

When I drive to work, I drive parallel to my running route. I even drive past the place where I park, and yes, I always park in the same place. I’m obviously a creature of habit.

Anyway, last week on my way to work, as I drove past my usual parking spot, pre-run, I felt my body almost screaming at me to pull over, park and go running…I felt a huge pull to do just that- though would probably have looked a bit silly in my work gear!!! I realised afterwards these were my neural pathways in action-My brain is so used to doing that activity, it went onto auto pilot and I felt it as a tangible pull. This was much like how I used to feel around chocolate- but no longer. I’ve developed new pathways and am free to eat chocolate when I want to, without feeling out of control or guilty.

The good news then, is that we can train our brain to help us discover alternative ways of doing things. Whether it’s getting used to exercise, or dealing with unwanted behaviours, we have the choice to do things differently. It takes a bit of work, but the more you do it, the easier it gets.

About the Author: Lisa Beasley AKA My Body Positive helps people find peace around food, weight and Body Image WITHOUT dieting.   She does this because she spent years dieting and hating her body, until she discovered Mindful and Intuitive Eating and Body Positivity.  This approach changed her world- so much so, she decided to help other people find out about it too!

Lisa is a Global Ambassador for ‘Body Image Movement’, the team behind the phenomenal Body Image movie documentary called ‘Embrace’, has performed talks at ‘BodyKind Festival’ the only Body Positivity festival in the UK, and for schools and businesses.  She runs workshops in person and online, as well as helping clients one to one.

To find out how you can train as a solution focused hypnotherapist click here for our hypnotherapy school information.